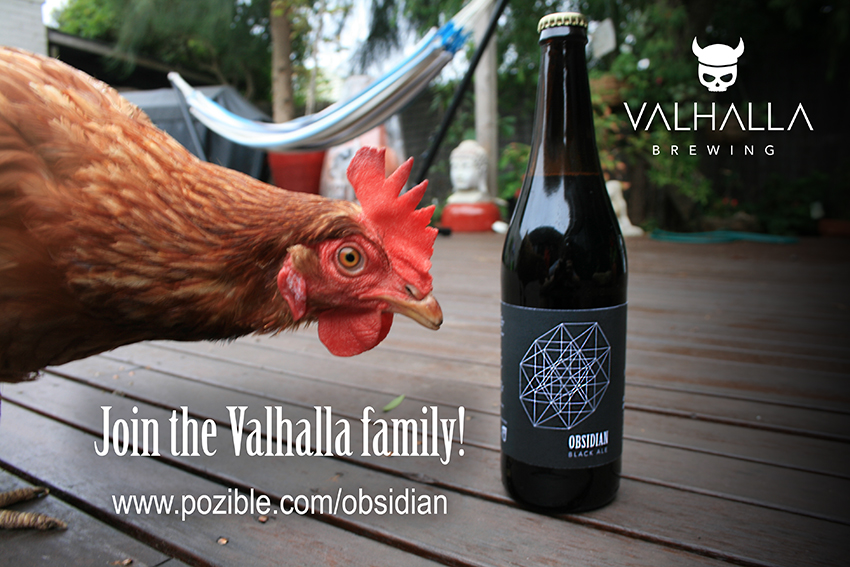 Initially funded via a successful $5000 crowd funding campaign on pozible.com, Obsidian Black Ale saw Scott Hunt, a home brewer for 25 years and small business owner for 13 years, realise his dream of owning his own brewery.

“One of the best things about the crowd funding campaign is the immediate engagement we have in the Valhalla Brewing brand,” says Scott.

“We have a ready made Valhalla “family” because the supporters of our campaign feel like they have a little bit of ownership in the beer,” he adds.

In total 45 people supported the first batch of the 6.8% ABV Black IPA style beer. 520 litres were produced at Red Duck Brewery in Ballarat, all of which was sold within 5 weeks of the first public launch on Friday 13th May 2016.

“We are thrilled with the response to the beer. Not only have those who supported the beer loved it, those who have drank on tap or out of the bottles have responded really positively,” says Scott.

“Our next batch of Obsidian is underway and already the kegs and many of the bottles are accounted for on pre-order. Our challenge now is to continue producing enough Obsidian to keep the momentum going!”

Valhalla Brewing are now planning to crowd fund their second beer, an “Imperial Summer Ale” that will go by the name of Aragon. There are some lessons learned from the Obsidian crowd funding that will be applied to the new campaign.

“The logistics of getting everyone’s rewards to them was a bit of a nightmare. It ended up costing us a bit more than anticipated, not to mention the inefficiency and lack of care from Australia Post,” says Scott.

“The one thing we will carry over from the Obsidian campaign is to offer our top 4 supporters the opportunity to have their name on the label. By immortalizing them on the label it is a fantastic way to recognise their generous support in getting the beer into the marketplace. Plus we reckon that immortalising our supporters on the labels is a very Valhalla thing to do!”

To keep up to date with Valhalla Brewing’s future crowd funding campaigns and beer launches, follow us on facebook @valhallabrew.